It's a little bit blue 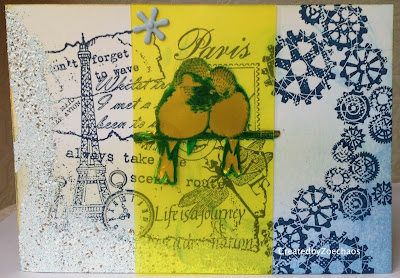 This was a sort of mopping up exercise, the base card is a left over from last week when I was playing with my brayer.  One half is covered with blue brayer inks and odd blue marks.   With no idea where this was going Inkylicious dusters were used to discharge the last bits of colour they were holding, blue, yellow and green.

It became a stamping collage, with Clarity's Paris montage, Indigo blu's cogs and Rogue Redheads love birds.  I even went so far as colouring the dragon fly and the frames of the 2 pocket watches.  Yes 2 one was later covered with shades of blue Stampendous Frantage.   By now cutting out a piece of yellow acetate to overlay part of the card had decided itself, but first the Indigo Blu cogs had to be stamped.   Initially the cogs were to be covered with the acetate, but once it was stamped with the Rogue Redhead Love Birds, it was obvious that would not work and the position of the acetate changed.   Wanting the lovebirds to stand out they were stamped again on copper coloured metal sheet and the image cut out, it is stuck to the acetate with glossy accents the best glue for none porous  materials and pretty much invisible through the acetate.  One simple blue split pin hold the card and acetate together.

Watching "The Whistleblower" while making this card.  What a shocking story; the events depicted took place at the end of the Bosnia war and tells of the story of an American Peace Keepers struggle to bring an end to the people trafficking of sex slaves there.   And the people responsible for this trade? local men and other members of the peace keeping force.  Western Women do not take your rights and liberties for granted they are fragile and if we do not protect them there are men who would trample them.
Acetate Clarity Stamps Indigo Blu Inkylicious Dusters Metal Rogue Redhead Designs stampendous