Did someone say Tag? 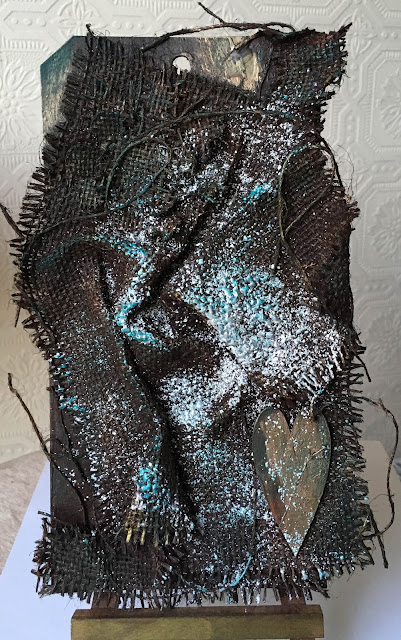 Now this was wonderful messy fun.   A week or so ago I took out a subscription to Craft Stamper mostly because the subscription gift was soooo tempting.   It was/is a selection of Thats Crafty Surfaces, thats MDF and white lined grey board cut in to hearts, tags and ATCs as well as a set of mini masks.  Not to be passed up and unlike similar offers in the past it was delivered within days.

I've already talked about the Be Creative Wonder Crystals and watching them on Hochanda the other day I learnt how effective they look on hessian.

Another product promoted on Hochanda recently was Powertex.  I've seen this before and been intrigued by it, so the starter kit became another must have.   Knowing that was on it's way I've been collecting lots of natural fabrics and other things to use with it.

Those then are all the elements.   Yesterday the Powertex arrived.  A marriage of the grey board some hessian and the fabric stiffner was quickly arranged.  Throughly coated the basic elements and assembled them, they then have to be left for at least an hour before the next stages.   The kit includes pigments and a fixative that is dry brushed onto the project.  Using these pigments it was magical to see how the colours picked out the folds and textures.    Next morning the stiffing process had continued (It takes 3 weeks for a fully coated project to be fully hardened)  Feeling that it needed a little more lightness I applied some pigment ink and sprinkled Wonder Crystals over the tag, heat softens Powertex so the melting process had to be done carefully but it was another moment of magic as the crystals became part of the project.   Left it alone for another 24 hours not quite sure if it needed anything more and if it did what.   Today I decided to just do a little more dry brushing using the turquoise pigment.

Watch out for more Powertex experiments.