on June 22, 2016
There is a lot of it around at this time of year!   And this year, at least until tomorrow, it is proving to be significant here in the UK.   Trouble is we not always understand what it means.   The Union Jack is made of 3 national flags, The Cross of St George, England.   The crosses of St. Andrew, Scotland and St Patrick, Ireland.   Wales is not represented on the flag, but those 4 nations comprise The United Kingdom.   Geography they are located on the British Isles, the 2nd largest is known at Ireland.  The largest occupied by Scotland England and Wales, is known as Great Britain.   Great Britain is the name of the island not the 'nation' inhabitants of these islands are known as British.  Complicated, maybe, but I get frustrated when people especially British people refer to Great Britain as a nation not an island. 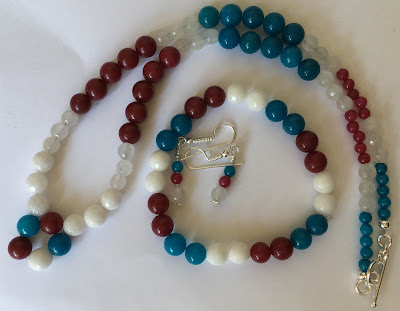 Necklace, bracelet and earrings made with Quartzite beads.    Just a little fun with the colours.

Or maybe you just prefer Blue, A Fluorite pendant also recently wired up.