on February 19, 2018
So settling back into mixed media crafting again this is the Powertex item started a few days ago.  I did wonder at one point how my vision would come out but now it is finished I'm really happy with the final result.

It started with a plastic bandit mask that I've used in the past as a form for Friendly Plastic projects.  Had the idea of a middle eastern head dress.   Covered the mask form with tissue to give the fabric stiffener something to adhere to.   A simple strip of lace was stuck to the top of the mask as an extra anchor point.

Next the messy bit.  All sorts of fabrics had been sorted through I settled on a muslin piece to go over the top down one side and back over.   Some more lace to go over that and some strands of fibre to simulate stray hair.   Opened my now old bottle of ivory Powertex and poured some into a plastic bowl stirring it and hoping it would still do it's job.   Some of the stiffener painted over the tissue covered mask and the muslin dipped into it, squeezed out and the next bit dipped.  It is necessary with Powertex to make sure that every piece of fabric is covered in stiffener.   The muslin was a little fiddly going over the top without it going flat and then twisted going down that side and back across.   The fibre strands and next layer of lace were added.   Everything then set aside overnight to start to stiffen. 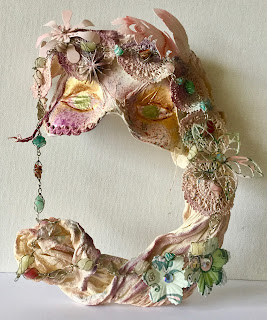 The muslin was still wet the next morning so I cut a piece of copper wire to use as a support for the draped muslin.  Bit difficult to get it in place this late in the process but the fabric was still soft enough.   There was still some Powertex in the bowl which I applied to help keep the wire in place.  Leaving everything for another day to settle it was time for the Glimmer Mist.  Copper, Juniper Wine and Red Apple.  This is when I started to wonder if it would work or not, and what to do about the eyes.   Rummaging through my scrap jewellery box I came across this pretty strand of wire wrapped stones the colours go so well with the sprays already added they were perfect, attached with silicon glue.

The flowers are die-cut with designer paper and a couple of die-cut feathers just seemed the right accompaniment.   Everything else in place time to risk the eyes.   Deciding to keep tissue over the eye sockets so some gilding wax circled over another finger under the paper.   thick kinda paint mouse painted around the socket edge and over the area the would be the lid.

24 hours later I decided it was done and has worked out OK and now it is hanging in the hall with all the other masks.   Mark looked at them today and it dawned on him that I have made then all and other stuff he has seen around the house.   It is a compliment that he did not realise they are all my work. 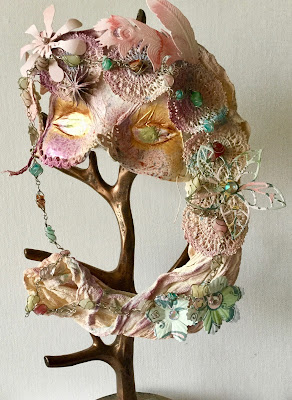 International Art and Soul, a fortnightly JFF challenge who just want to see how we express ourselves.   I like that idea.   Their theme this week is Use Stuff you Already Own.  Nothing "new" was employed here!

Love 2 Create, my second February entry to this monthly challenge.  They are always looking for Creative Mixed Media Projects.

Eclectic Ellapu, one of the original monthly mixed media challenges that I have always enjoyed.   Still enjoy and pleased to be able to enter again.

Now we just need the weather to get better, spring is coming.