on July 12, 2018
The boys made us proud to be English didn't they.   28 years since a British team made it to the World Cup Semi's.  I think they have done brilliantly, love the whole team spirit as well no media personalities or glamours wives there this time.  Football could be becoming a sport again!   Mind you I still don't "get it".

Sport for me is playing around in the craft room trying to see how different mediums and styles can be used in new/different ways.  Just had another idea as well that I will try tomorrow and report back to you on it. 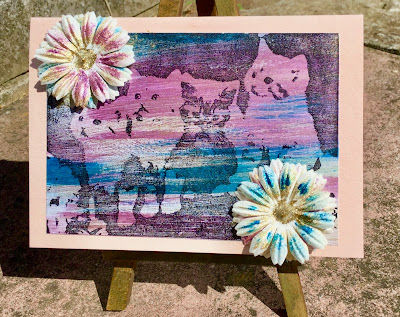 This card came about with my continuing to experiment with mixed media on cards.  I also like the idea of mixing styles here grungy and some very cute kittens.  First Imagination Crafts starlight paint dragged over glossy card.   When it had dried the negative image stamp used over it with Black Archival ink.   The card was then trimmed to the size of the stamp, and attached to a pinkish card blank with DST.   Just to give it a little extra paper flowers were touched with the same paints, again I wanted a shabby/grungy look on something generally seen as pretty.   Glitter texture paste used to attach the layers of flowers and give them a coloured centre.

Successful experiment methinks.    Wonder what these folks will think of it.

The Crafty Addicts - All about Pets.

City Crafter - In he Pink.

Show us Your Pussycats - Anything Goes but must include a Cat.