Running out of time

on August 25, 2018
There went another week and it has been a good one.   I've rejoined a gym so I've been there, had some paid work so did that.   Got the pliers out and made a new chainmaille bracelet.  Had planned to go out on the bike yesterday but rain stopped play.   Had to spend the time in the craft room.

This is the bracelet, it is a 3 in one spiral weave.  Can be fiddly to start but once you get a short length of chain it is easier to see where the next jump ring goes.   Like all chainmaille gauging the length can be surprising.  You get absorbed in the patten you can forget to stop, then if you are working to a measurement you have to remember to allow for the clasp.   Caught myself out like that many a time.

This bracelet is custom made you choose which plated finish and length you want, measure your wrist and add 1/2 - 3/4 of an inch for the length.  Link to my Etsy shop on the side bar. 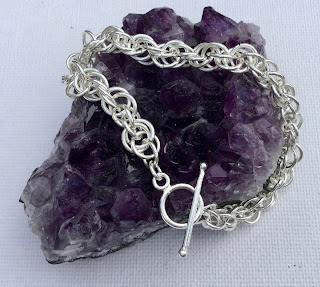 The bracelet above is displayed on an amethyst geode I got a little while back.   Seeing how quartz has formed in nature is lovely, it also helps you to understand how those gems will behave in the hands of a gem cutter.   It has started me on a new hobby/interest and I'm hoping to collect more of these beautiful gemstone chunks.  To add to the Amethyst I now have this lovely quartz piece, makes a love piece of home decor and will be used for future jewellery photos. 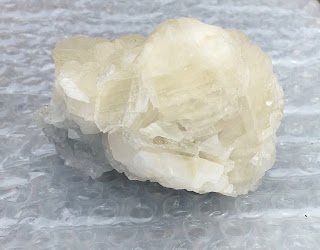 Still had to get into the craft room with paints and pastes, stamps and inks.   This has been growing in my mind for a little while.  Always admire mixed media assemblages on canvas I'm a big fan of mixed media, 3d, textural pieces but not so much of the pretty pretty work a lot of people do.

Had the Tando clock face on my desk, it was pained with Imagination Crafts starlight paint but not used.  It cried out for this project to be based around it.

Box canvas approx 12" x 9" painted with pastel blue chalk paint.  When that dried a Powertax stencil laid over and Imagination Crafts Structure paste pushed through.   Once that had dried white chalk paint swirled around the middle.   An old Kanban stamp used freehand in the middle of the clock face, it had to be freehand to get it to fit, the image was then traced over with permanent pen.   Lots more Tando chipboard elements painted with Decoart Acrylics and also some metal numbers.  These things were then arranged and fixed to the canvas.   Glimmer mists in shades of blue blasted over the top and then some blue Brusho.  Next the Tando people and the cog inner were painted added.   Finally a couple of silver coloured charms and a scrap watch or clock face were glued into place.  The whole time running through my mind was time passing, the ongoing expansion of time/space and just maybe our insignificance. 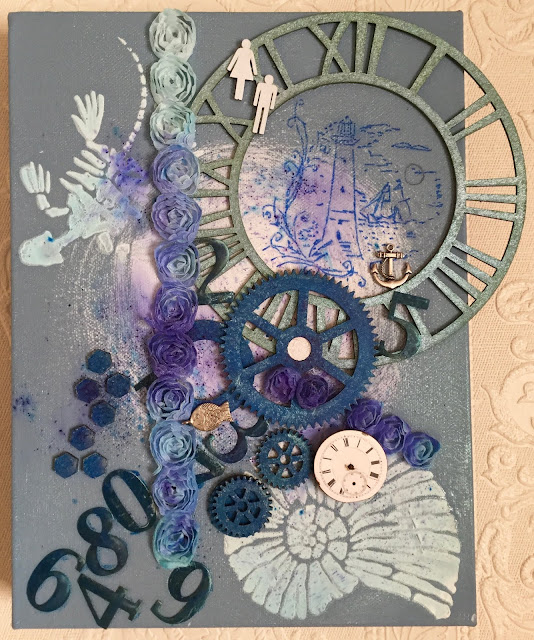 So there you are this week flew by, just have to get the washing done now and maybe a bike ride before sheltering from the promised bad weather tomorrow.  Where ever you are and what ever you are doing have fun.

Moving along with the times - Texture, it's week 2 of this fortnights theme but texture is right up my street.

Southern Girls Challenge - Use Metal, a down under based group it's the first week of their fortnightly challenge.  For the benefit of visitors from this challenge all the numerals are brass but I've pained them hence the appearance.

Stamps and Stencils - Industrial/Grungy  This monthly challenge is one I don't often enter as they do usually have a theme, like this one.   I really should pay more attention to them.