on May 28, 2020
No not Cesar Romero, Jack Nicolson, Joaquin Phoenix, Heath Ledger or any other actor but the real Joker.

As a juvenile when his parents kicked him out of the nest and told him to go fend for himself he was often seen in Tesco car park begging for scraps.  Learning that this was not the best watering hole he flew off to the near by beach front.   There he quickly discovered that holidaying people drop a lot of food, mostly chips and maybe a bit of battered fish as they try to walk and eat.   Hanging out near the local chippy became his haunt of choice.   Today people can tell which is the best chippier in town by the numbers of birds in the vicinity.

Waiting for people to drop perfectly edible food was ok but the Joker thought a bit un-hygienic after all the people did not want it once it had fallen to the ground so why should he?  With daring, patience and practice The Joker taught himself how to swoop in on unsuspecting people and take the food out of their hands or plate or other handy place they were keeping it.

The Joker grew so successful at this that he soon acquired a following of seagulls who would wait until his antics had scared the people away and then they could all enjoy a fish and chip feast.  Soon others copied his skills and daring to stage their own raids.

The Joker thought this a great idea and moved to another sea side where once again he sought out the finest chippy and started again, first a solo act and then bring on other brave seagulls to help feed their growing circle.  For all I know The Joker is still out there at one holiday resort or another helping other seagulls practice and perfect their art.  You will know where he and his followers have been, just go to any British holiday resort, buy yourself a bag of chips and wait. 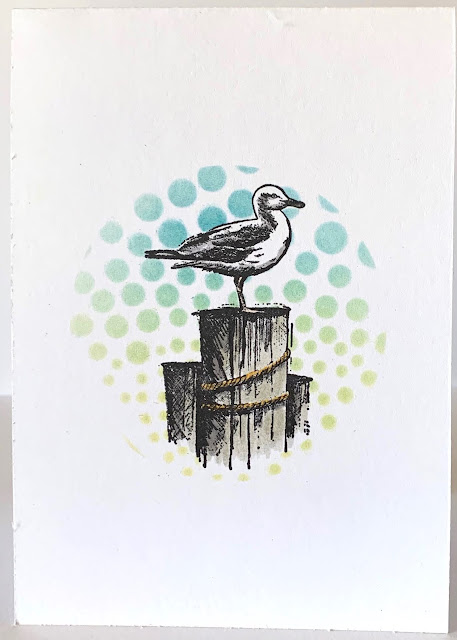 After a couple of the Less is More team explained that my previous entry had too much embossing something else had to be done.  I have always loved the Joker (a name given to him when he was used in a deck of cards I made).   Stamped he was masked and then a circle punched in some paper laid over and finally a dotty stencil.  Distress inks "Salty Sea or Ocean" and "Mustard Seed" dusted over the top.  Stamp mask removed and felt pens added some colour to the stamped image.  There are hopes for this one layer CAS dotty card.

I also thought Simon Says weekly Monday Challenge - Going round in circles might enjoy this one, although it might be a bit to clean and tidy for them.

Another glorious day, if a little breezy, think I might go and sit in the garden.  Keep well, stay safe, & HAVE FUN