As mentioned previously I started something else yesterday.  Today playtime continued and the final result is here. 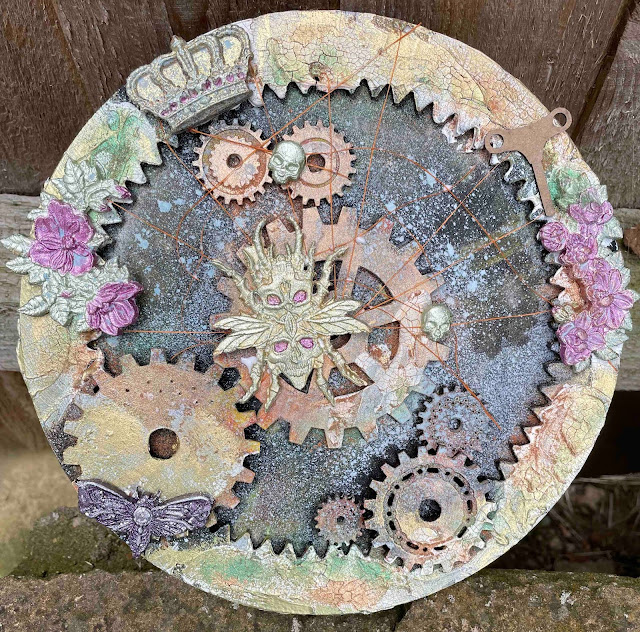 I enjoy mixed media 3D projects of any kind and with the impending close of SanDee and Amelia's Steampunks challenge  it seemed fitting to produce something to mark the event.  I only discovered this challenge after my break so I've not played as often as many others but do enjoy it.   This then is a tribute to Steampunk in decay.

There is a mixture of MDF shapes and Air dry Clay pieces.  The base pieces were painted initially with black gesso.   A layout decided upon the various MDF cogs were painted with Decoart Acrylics in rusty colours, then other mediums were introduced with metallic paints from various sources.  Next was the turn of the Air Dry pieces previously made using Zuri moulds.  As Steampunk is a fusion of Victorian industrial ingenuity and Sci-fi imagination it is never plain, the Victorians were known for their love of embellishment.  This was reflected in the crown and 2 floral pieces.  These had been coloured with Imagination Crafts Starlite paints.   These were attached with a generous spread of Dream Weaver Crackle stencil paste.  Before the paste dried Perfect Pearls were sprinkled over in greens, yellows and brass colours.  The paste actually dries white so when it was dry and cracks showing Treasury Gold paste worked into it.  Distress Oxide Speckled Egg sprayed over it.

There were still some more Air Dry pieces to incorporate with the Spider as the centre piece.  Once painted but before they were added a web was required.  This was achieved with the use of some thread and glue.  It's a bit messy but Itsi does not mind about that her mind is on finding a suitable mate to for offspring and perhaps a tasty meal after their combining.   It was good enough to have captured some tasty hobbits their skulls are left in the web.  All the while the moth sits watching and waiting it's moment.

Other Challenges I'm sharing this with.

613 Avenue - Always anything Goes there is an option to use one of the colour pallets offered.

Well all set up for another busy week with calls Monday, Wednesday and Friday again.  Stay Safe, Keep Well and Have Fun