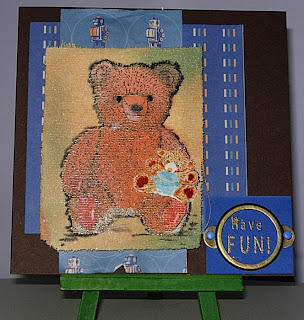 What a week, it is one of those busy but boring times at work just now not the sort of time to come home and craft in other words boring. What is possible at times like this going on imaginative journeys and there have been a lot of those and will be more over the next few weeks. This is the result of some of those ruminations.

This year I have been following Tuesday Taggers having found them over the holidays. The challenge is set on a Tuesday so with no time or energy to make a response during the week there has been ample opportunity to design it in my head. No i try not to look in there to often either.

Teddy has a Teddy both are old Anita's stamps, little Ted being stamped on shrink plastic sakura'd cut out and shrunk. Big Ted is stamped onto paper canvas in black and partially embossed in gold, paws coloured with sakura. A mask was made to cover ted and the rest of the torn and frayed canvas sprayed with GM. The frame of the mask (the negative) covered that and Big Ted received his own coat of GM. the outline and limb lines were then marked with black pen and a bit of shadow added. Little Ted was then fixed to Big Ted's knee. Papermania mats mounted on brown card, a 'We are memory keepers' metal tag frames the message, a wish that who ever gets this cards Has fun.
Canvas Glimmer Mists Sakura Shrink Plastic