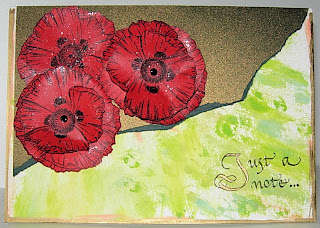 A few weeks ago I made a Poppy card (16th April) for another challenge and explained that it is one of several that will be going to Janet's Poppy Appeal Event.

For this fortnight The Stamp man have Poppy's as their challenge theme and if you want to then you will be welcome to send them in for Janet's upcoming event.

For this card I used Papermania's Build a Poppy set from a couple of years ago.   The background is green daubers on non stick mat dampened with water and the card pressed into it and dragged.   Copper dauber and gold leaf pen trim the edge of the card.

Janet hun if you see this it will be with you along with one or two others in the nearish future.   Good luck with the event.
Poppy appeal