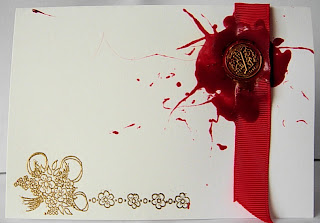 Plans to go out this afternoon were cancelled so I've been making the most of my time!

A one point did not think this disaster would make it here but looking at the end result decided its quite fun.

The challenge this week at Less is More is to use a Monogram.   I've used wax and a seal with the initial Z on it.   Could not find any matches so decided to melt the wax with a heat gun.   Of course the blast of hot air blew the wax about until eventually I had enough control to get it where it was intended to go.  A little stamp embossed in gold and some gold rub on colour to highlight the Z.

Do have another CAS Monogram card in mind will have to see how time pans out.

Thank you for all your lovely comments and I agree it would look better on its own,  the stamping was done first and the rest of the plan was abandoned once the wax was done, which is why there is a stamp on here in the first place.
Wax