Dragon's Dream Tag it on - Its a Horse's Life 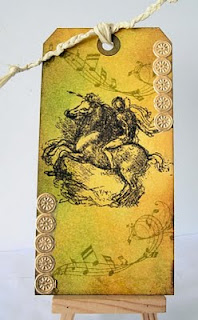 Whoo my turn to suggest the dream this week at Dragon's Dream TIO.   We were a little quiet last week were you all out enjoying some sunshine?

The dream this week is an Equestrian one a celebration of one of our oldest and most amazing companions.   Consider Horse's are prey animals we humans are hunters.  With a keenly developed sense of self preservation, great naught to fast  acceleration and a very nervous disposition it is utterly amazing that these beautiful graceful beings allow us on their backs.   The classic hunter kill position is on the back.    Not only are we allowed to mount them, but we can control them to the extent of overcoming their flight instinct to ride into danger!

The stamp is an old Rubberdubberdo magnetic one found in a bargain box a couple of years ago.   The sense of power and grace in the sketch is magnificent did not think it needed much else.   Some DI blended over the tag, musical script and some German Scrap.   The raffia was fun to plait, reminded that I have never like plaiting Mane's and Tail's, but have taken a turn or two mucking out.

Will you join us at Dragon's Dream TIO this week with a horsey themed tag?