on December 01, 2011
First of December where did the year go?   If this month goes as fast as the year so far Christmas is tomorrow! 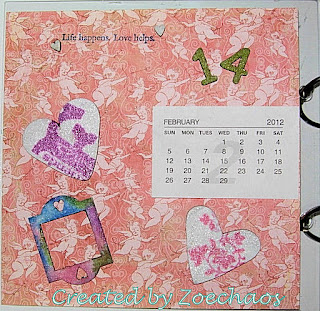 With a new month the baton at Just for Fun has passed to me.   December is such a significent month Christmas, the end of the year but before those the December solstice.   At one time the solstice was the beginning of  the new year, the returning sun and lengthening daylight hours promise new life.   The celebrations and ceremony of the occasion might have passed from modern memory but we still celebrate and incorporate ancient traditions in our modern holidays.

So what has this got to do with February and Just for Fun.   With so much going on it seems a good time to look at the seasons of a year starting with Winter.   My February page is pink and fluffy and romantic but February is a winter month and in 2012 it is just a little more special as 2012 is a leap year.

Being far more sensible than me Von and Neet have used the theme of Winter very differently.   Hope you will join us at Just for Fun.
Tando