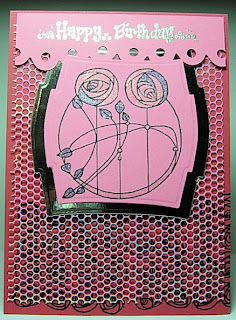 Happy Christmas Eve, when the shops shut today if you have not got it not to worry there will still be somewhere open in the morning!    Basically though the UK is  now shut until 2012, the rest of Europe shuts for August not us our national holiday starts now LOL

Back to the Pink, not a colour I turn to much, let alone feature!   Then Sue told us what the Tanda Teaser is for two weeks and simply it is PINK!    Rummaged around and found some suitably coloured card stock and sequin waste, what to do with it?   Sue's Mack stamps seem to fit.   The four rose stamp has been used in black repeatedly on the base card which was then covered with the sequin waste.   Nesties used to cut silver mirra card and paler pink card which was stamped with another image from the set and coloured with Sakura Glitter Pens.   The greeting is an old one stamped onto card cut with a TH edge die.    Think it looks better in real life but all those shiny surfaces are difficult to photograph.
nesties Tanda Stamps