Still playing catch up with my Christmas Cards 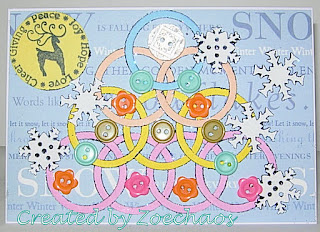 Did I say CAS was the way to go? got sidetracked there somehow!

This card was inspired by all the challenge's with the theme of non-traditional colours, snowflakes, punches and Circles.   I'll list them at the end of the post.

In your tucked away old stash do you have a box or two of Papermaina shapes?   Something that seemed like a good idea at the time but perhaps never proved as useful as you thought? I have!    The circles  came in useful for this card.  The solid one has been stamped with one of this year's Craft Stamper's cover stamps that is also a circle.   The snowflakes have been punched from a couple of punches and everything stuck down after being run through a zyron sticker maker.   There is always a bit of glue on the edges after using that tool so I pressed dark blue glitter into it for added sparkle.     The buttons added with Glossy accents add more circles and non traditional colours.