Day out and a little jewellery

on October 17, 2016
Had a nice day yesterday, wondered over to Doncaster for Stamp Magic at the Dome.   In the morning the weather as wet spray on the 180 convinced me to drive a little more slowly than I would in better conditions.    In places it also looked like I'd missed the best of Autumn with bare trees along the way.   Coming into Doncaster the weather started to improve as did the scenery at the Dome facility.

I guess I'm jaded but the show was something of a let down.   Yes of course I managed to spend money, the man selling card stock was there as ever with smooth white card at a good price so stocked up on that.   Sweet Poppy stencils had some interesting designs, including the only decent Robin in the whole show.    Inkylicious were there as well, as regular visitors know I don't seem able to do anything without their dusters.  For me that was more or less it, very surprised there were no alcohol inks or distress re-inkers.   In fact there were no stand out products at all, god for peeps like me no massive spending spree either!

One nice surprise while there on the Inkylicious stand I reached for a shopping basket at the same time as someone else, as it happened there were just 2 there 1 each.   Glancing up I realised that the other person was Sally Holmes of Crafty Salutations.    Sally is a talented crafter and also natural world photographer who I very much admire.   Sally is also a lovely person and it was great to have a little catch up.

Driving home the sun was out, it had become a beautiful afternoon.   Just had to keep reminding myself that my foot is not made of lead.   Home safe sound and with out speeding problems (fingers crossed) I finally managed to make this necklace that has been tickling my imagination for a little while. 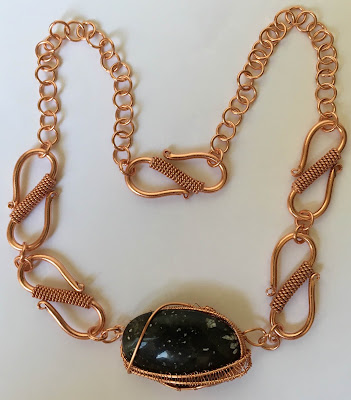 Feature copper S hooks, copper jump rings and copper wire.   Very low on copper wire will have to get some more.   I have had the cabochon for ages and cannot now remember what type of stone it is. Black with white flecks.   It hangs nicely on the neck as well.

Umm I've got some new toys to play with, share later.