on November 06, 2016
I am a pacifist.   I think we can gauge how far our civilisation has come by looking at the ways we make war, it probably started with two family troops fighting over a good cave and in those fights it is entirely possible that no one was seriously hurt never mind killed.   Today well turn on the news we have got so much better at the art of war.

WW1 was hailed at the time as the war to end wars, in that regard it failed.   The service men and women returning from those bloody stages we then expected to just slot back into daily life as if nothing had occurred.   Many were so badly wounded that they could not, the British Legion was founded to help take care of them.   One of the things they did was to give Ex service men the job of making simple paper poppy's which were sold to raise funds to help the legion work.   Remembrance day was first marked on 11th November 1919 one year after the end of WW1.   Today we continue to honour that tradition remembering the consequences and sacrifice made in all conflicts then and since, and sadly there have been a lot of them.

I have great respect for our service people.    No surprise then that my November page is in honour of Remembrance day and all it stands for. 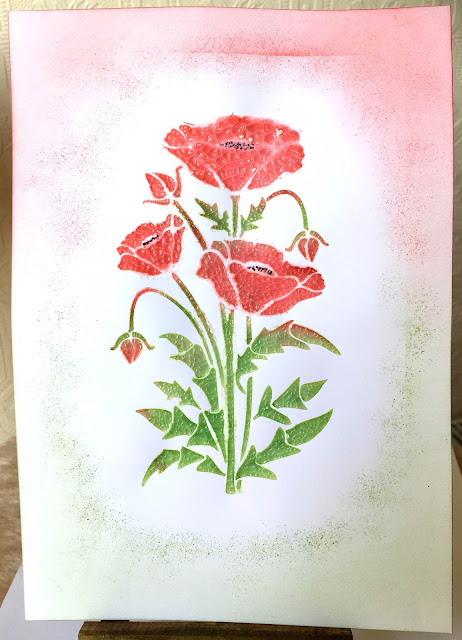 This Sweet Poppy stencil was produced originally as an act of remembrance with proceeds from the first batch going to the legion, I don't know if they still donate but the intention is one to respect.

Red and Green dusted and stencil brushed onto plain white card.   Viva crackle glaze spread over it.   The crackle effect did cause the card to buckle so this is the only kinked page in the calendar.   Wanting this to stand out and speak for it's self the inks were just dusted and stencil brush dabbed around the edge of the piece.

I wanted to enter this into 2 challenges but they both require stamping so I will just invite them and their followers to come and look.